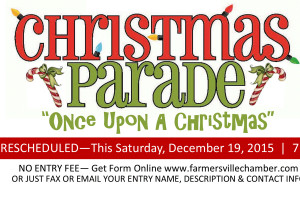 Neither rain, nor sleet nor hail can stop a Christmas parade, at least not a rescheduled one.

The Farmersville Chamber of Commerce Christmas Parade has been rescheduled for 7 p.m. Saturday, Dec. 19 in downtown Farmersville.

The parade, which was originally scheduled for Dec. 12, was cancelled due to the threat of severe weather and safety concerns of those participating in the parade and the spectators.

Anyone wanting to participate in this weekend’s parade can do so at no cost by either going online to www.farmersvillechamber.com for the form, or even faxing or emailing the entry name, description and contact info to 972-782-6603 or [email protected]

Those who were entered in last week’s parade will be kept in the parade lineup, organizers said.

For the complete story see the Dec. 17 edition of The Farmersville Times or click on the E-edition.