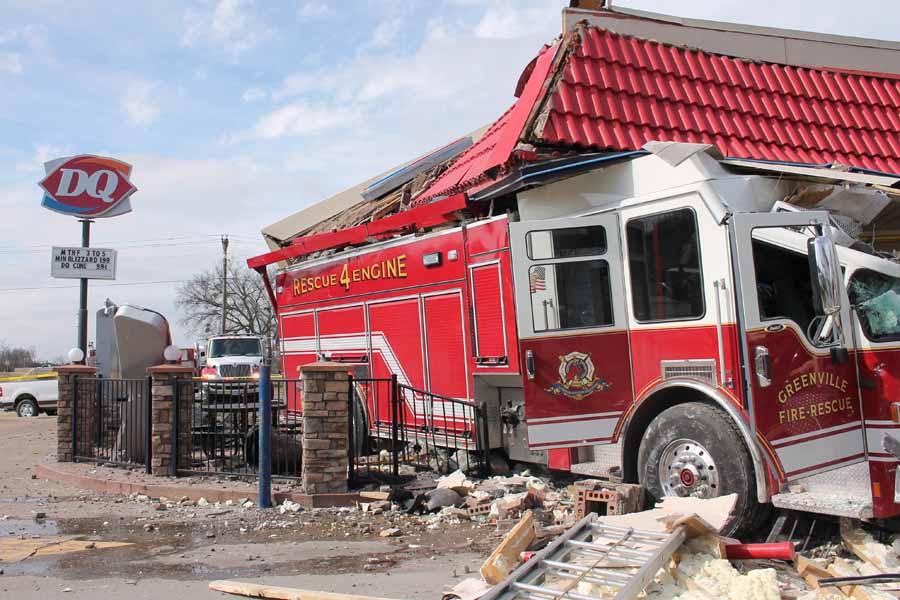 A Greenville FD Fire Engine drove through the Farmersville Dairy Queen Jan. 20. No one was seriously hurt in the wreck.

A Pierce Fire Engine sits in debris at the Farmersville Dairy Queen after it was driven though the building. 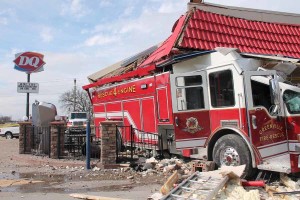 A Greenville FD Fire Engine was driven through the Farmersville Dairy Queen Jan. 20. No one was seriously hurt in the wreck.

“What we know at this point is that the driver of the Greenville Fire Engine was eastbound Audie Murphy Parkway (Hwy. 380). The driver was not a Greenville Firefighter but was a worker for a company who was doing work on said vehicle. The driver was returning the vehicle back to Greenville when the accident occurred,” Farmersville Police Chief Mike Sullivan said.

According to witness statements, the fire engine left the roadway from the eastbound travel lanes on Hwy. crossed the center median across the westbound travel lanes and again left the roadway into the parking lot of Dairy Queen when the vehicle struck the front of the building and drive through area, according to information released by Farmersville PD.

The police department has interviewed the driver and has a hold on the vehicle for further inspection. “There have been reports that the driver had a heart attack or was texting. These reports are not true nor has an approximate cause been determined as to why this accident occurred. The accident remains under investigation until we can determine whether there was human or mechanical issue at hand which led to the accident,” Sullivan said.

The parties that were injured were transported to the hospital. Two of the victims (driver & DQ employee) were transported by ambulance. One victim was transported by personal vehicle by a family member. The latest update that was received is that all the injuries were non-life threatening.

Editor’s note: This story was updated at 5:04 p.m. with additional information.