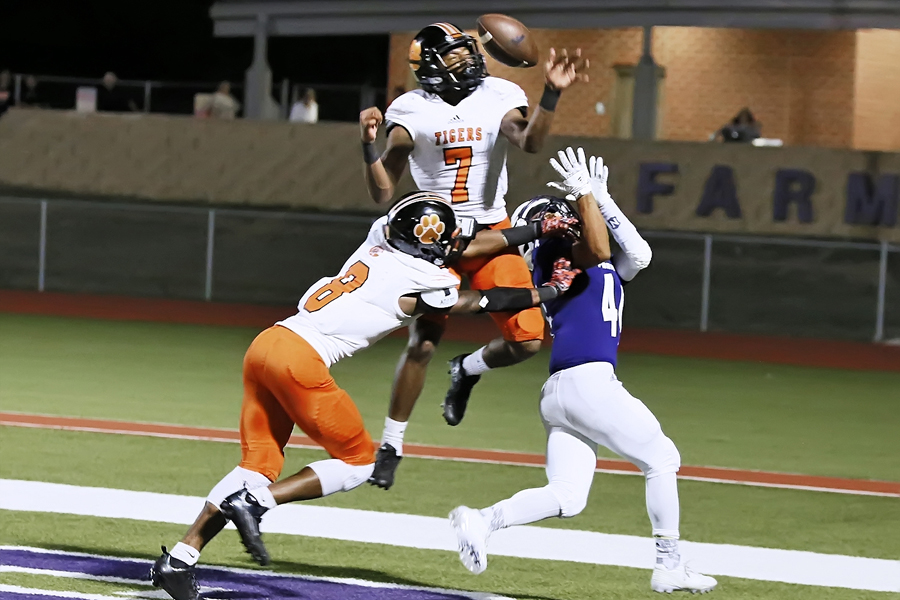 Robert Arqueros attempts to come up with the catch between a pair of Commerce defenders last season in the District 7-3A Div. I opener. (File photo)

COMMERCE – Starting this Friday every win is crucial in the hunt for a spot in the Class 3A Div. I Region II football playoffs.

Farmersville opens District 7-3A Div. I competition 7:30 p.m. against Commerce at Memorial Stadium.

“That first district game (against Commerce) is always the toughest because it doesn’t matter what their record is in the preseason. They know this (winning first game) is their best chance to get in the playoffs,” head coach Sammy Burnett said. “They are always up for us and it’s going to be a good ballgame.”

The field is located on the campus of Texas A&M University-Commerce on the Frontage Road in Hunt County.

“They may be 0-4, but they have been in every game that they’ve played,” Burnett said. “We are going to have to do what we do best and limit the mistakes. If we can do that and stop them we have a chance of winning.”

Commerce enters this Friday’s contest with eight starters back on offense and defense.

“They have some big kids on defense, but I think our speed will counteract that,” Burnett said.

He added, “They have some good kids on offense. We are going to have to be disciplined and limit the big plays.”

Prior to the start of the season, Dave Campbell’s Texas Football magazine picked the Tigers to take fifth in district.

Below Commerce were Grand Saline in sixth and Quitman in seventh.

Scoring updates will be posted at the conclusion of each quarter on The Farmersville Times’ Twitter.

For the full story and photos see the Oct. 5 issue.