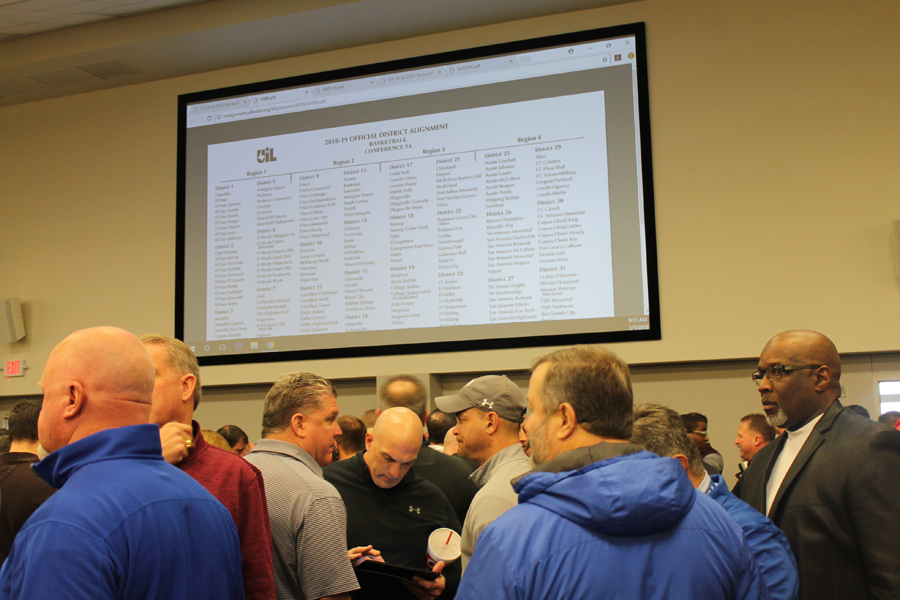 Coaches and athletic directors from around the Metroplex converged on the Birdville ISD Fine Arts/Athletics Complex for the Thursday, Feb. 1 UIL realignment unveiling.

As expected, Farmersville High School athletics was moved up in classification during the Thursday, Feb. 1 UIL realignment.

They were bumped up from Class 3A to 4A. Before that they were in 2A and went to 3A.

Farmer football was put in District 5-4A Div. II with Caddo Mills, Community, Sunnyvale, and Dallas ISD’s Lincoln and Roosevelt.

“We are pretty much located in the same area. We’ve played Caddo Mills, Community and Sunnyvale in the past and we know what to expect. Roosevelt and Lincoln have good athletes that are athletic,” he said.

Being in a six-team district, Farmersville gets five non-district games, compared to four the last two seasons.

“We are going to be challenged for sure. Playing Cooper that first game is always a good test. The rest of the games are going to be just as tough,” Burnett said. “If we can make it through the (non-district) schedule we should be in good shape for district.”

In all other sports, Farmersville was aligned for 13-4A.

In that grouping are Caddo Mills, Crandall, Community, Quinlan Ford and 3A move-up Sunnyvale.

From the current 10-3A Lone Oak was placed in 12-3A, Commerce moved to 13-3A, with Howe, Leonard, Van Alstyne and Whitewright remaining together in the new 10-3A.

Down Hwy. 78, Blue Ridge High School was bumped up in classification from 2A to 3A.

The football program was placed in 9-3A Div. II with fellow 2A move-up Bells, Cooper, Leonard, Paris Chisum, Pattonville Prairiland and Whitewright.

If they were to make the playoffs an opening round opponent would come from 10-3A.

All other Blue Ridge sports were sent to 10-3A with Bells, Bonham, Howe, Leonard, Van Alstyne and Whitewright.

Bland, which doesn’t play football, was aligned to 13-2A for the next two years. They didn’t move up or down in classification.

They were put in with Celeste, Honey Grove, Trenton and Wolfe City.