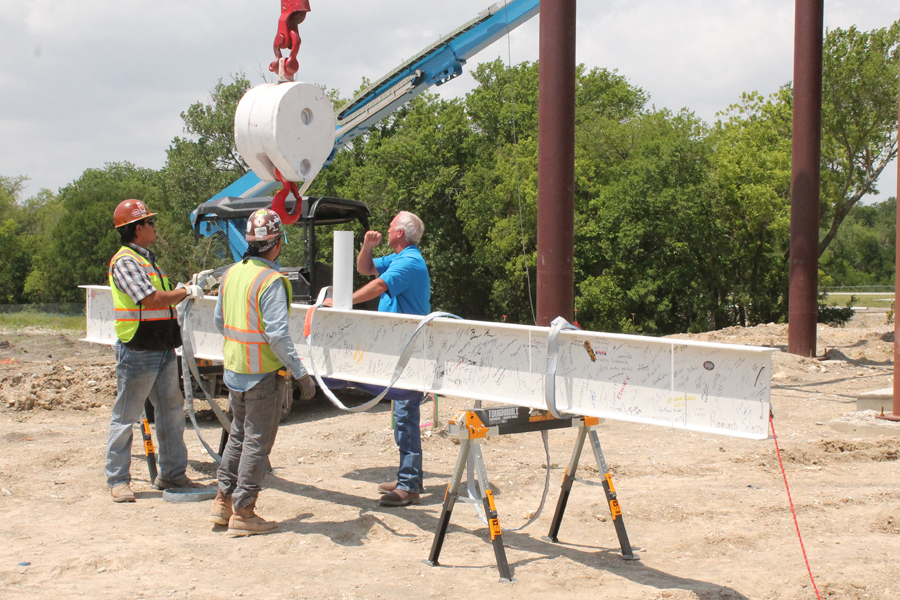 The contractor-at-risk on the Collin College campus under construction in Wylie, Skanska USA, held a topping out celebration last week to mark the erection of the last piece of structural steel for the 300,000 square foot project.

The program and barbecue lunch were held in what will be the conference center of the center, among I-beams and roof decking. Invited were the construction workers and officials from Collin College, the city of Wylie and Wylie Independent School District.

Construction started in September 2018 and is scheduled for completion in time for classes starting in September 2020. The Wylie campus, which consists of a student center, learning center, commons building and central utility plant, carries a price tag of $131 million.

Also in the plans for the college are satellite campuses in Farmersville and Celina. The expansion program is funded through a $600 million bond issue approved a year ago by voters.

The college is being built on a 96-acre site on Country Club Road across the street from the Wylie Municipal Complex. The city donated 44 acres to the project and the college acquired the rest.

“We received the notice to proceed on Sept. 18 and it has rained ever since,” Project Manager Joe Lindemann said.

In spite of the almost constant rain, he reported that work is on schedule, thanks to the perseverance and dedication of subcontractors and their crews. He noted that the steel for the conference center was erected in a month.

“It’s very unusual to have three buildings going concurrently,” Lindemann said. “It’s been a challenge with all the rain we’ve had.”

The project is divided into three divisions, one for each building and each with its own supervisors and crews. The divisions allow work on the buildings to proceed independently without delays for craftsmen moving from one location to the next.

A special I-beam painted silver with the Skanska logo was prepared for the topping out ceremony and attendees took the opportunity to sign the beam before it was lifted into place. Two steelworkers bolted the beam in place, installed an evergreen tree on top and unfurled United States and Collin College flags.