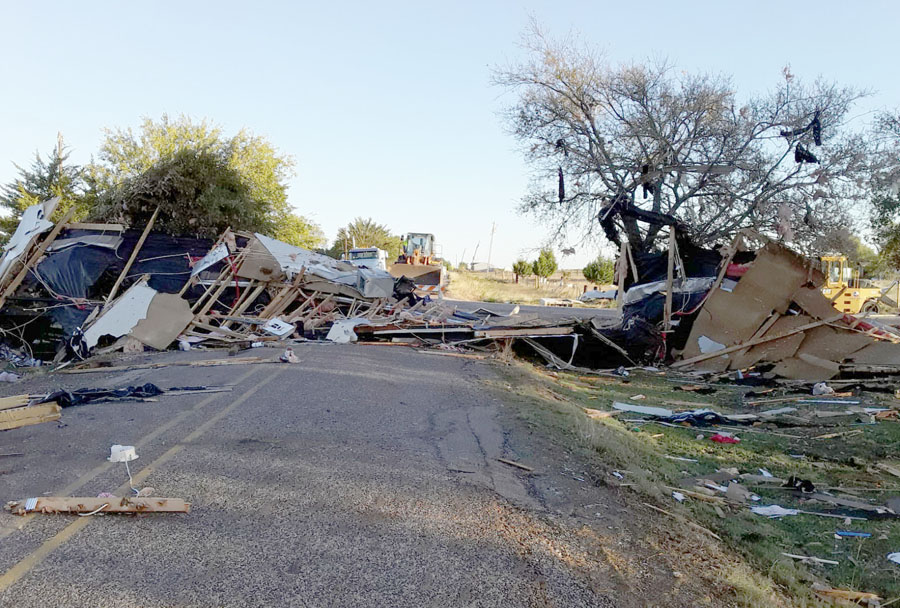 This mobile home landed on its side on County Road 697 due to straight line winds around midnight Sunday, Oct. 20. Two individuals were injured in the home occupied by four children and four adults. Two other residences were damaged and another individual was injured as well. Cleanup and donation efforts for the families are in the works.

It was the second storm of Sunday’s foul weather that destroyed Esmeralda Solis’ home just after midnight.

A witness was not exactly sure what ripped the mobile home apart and left it on County Road 697. Conditions made it nearly impossible to see the cause.

“I did not see a funnel cloud,” said Gladys Vasquez. “It could have been straight-line winds.”

The Vasquez family live just south and east of the road from the Solis home. Their home suffered damage to its roof.

According to reports, when public safety vehicles arrived on the scene the Solis’ mobile home was lying on its side in the roadway.

Two other residences were damaged as well.

Farmersville Firefighter Kevin Linsman agreed with the cause being high winds.

For the full story, see the Oct. 24 issue or subscribe online