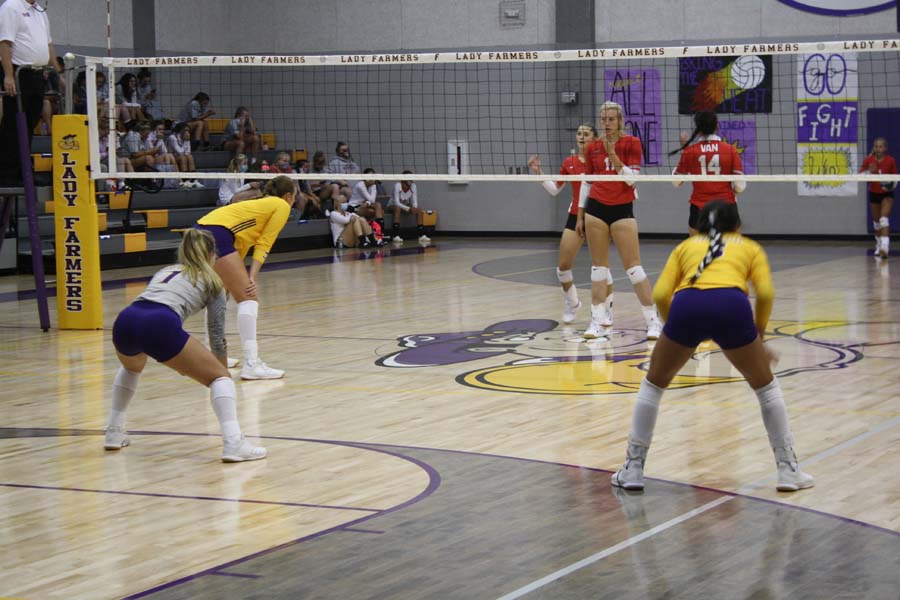 Playing in front of their home crowd on a wet last Tuesday night, Farmersville Volleyball continued to prove themselves against their non-conference opponents, sweeping the Van High Vandals on Sept. 1.

With the sweep, the Farmers secured their tenth sweep of the season, moving to 11-1 on the season. They entered the game ranked seventh in 4A after a loss to Gunter and a win over Midlothian Heritage.

After the game, coach Harold Davis praised his team for playing more aggressively and contributing.

“We came out, we were passing better and attacking the net more aggressively,” Davis said. “[Everyone] was doing what they were supposed to do and contributing. Except for a couple of spells in set one and set three, I thought we played extremely well tonight.”

To start off the match, the Lady Farmers fell behind early, conceding five of the first six points to the Lady Vandals, before a momentum swing allowed Farmersville to build a 9-7 lead. Going back-and-forth for most of the set, the Lady Farmers used an 8-2 run to take control of the game, jumping out to a 19-14 lead which caused Van to take a timeout. A kill by sophomore Angie Lee clinched the set victory as the Lady Farmers won the first set 25-20.

Holding an advantage over Van, Farmersville took control of the second set early, building an 11-3 lead to force Van to take an early timeout. Keeping pace over Van, the Lady Farmers never trailed by less than six in the set, as another kill by Angie Lee gave Farmersville a 25-13 second set victory over Van.

In their next contest, the Lady Farmers faced Van Alstyne in Farmersville on Friday, Sept. 4. Van Alstyne enters the matchup with an 8-2 record, including a loss to Gunter High School.

For a recap on the Van and Van Alstyne games see this week’s edition of The Farmersville Times in print or e-edition.