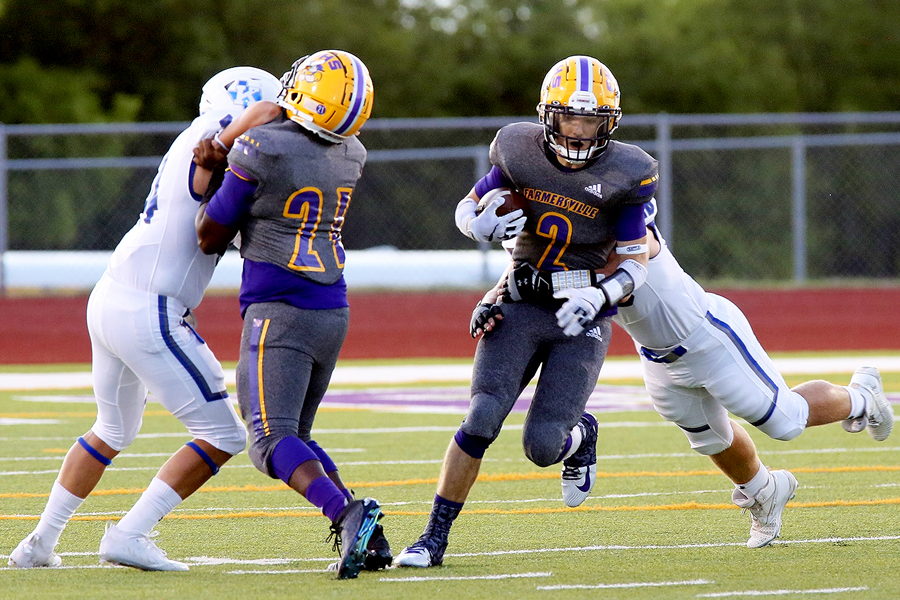 Three keys to the game: Farmersville football versus Caddo Mills

After a 45-7 loss to Quinlan Ford, the Farmersville football team moves on to face another undefeated district opponent, as they travel to take on 5-0 Caddo Mills from Ed Locker stadium Friday, Oct. 16. Here are three keys to a Farmers victory over the Foxes:

This season, Townley has been the offense for the Foxes, leading the team in both passing and rushing yards. Through five games, Townley has 77 carries for 728 yards on the ground while completing 71 of his 95 passes, or 74.7 percent, for 1375 passing yards, 14 touchdowns and five interceptions. Considering how much Townley is a part of Caddo’s offense, the Farmers will need to contain him in order to handle the Foxes offensively.

Against Ford, Farmersville’s passing offense couldn’t establish any traction, only collecting four passing yards. If they want success against Caddo Mills, they need to get into a rhythm early and often, hitting receivers Aidan Gray and Cooper Strawn for long touchdown drives.

On the offensive end, Farmersville will need to exploit a subpar Foxes defense that has allowed an average of 28 points per game. Farmersville has been able to thrive this season when they are best able to run the ball effectively and efficiently.

For live scoring breakdowns and updates from Farmersville versus Caddo Mills, follow the Farmersville Times on twitter, @farmersville.

For the full story, see Oct. 15 issue or subscribe online.