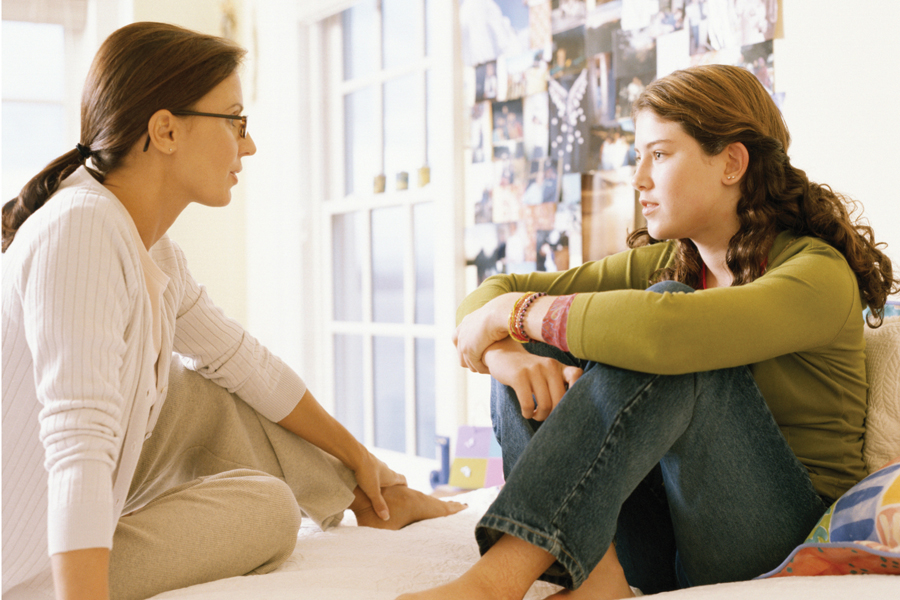 Talking to teens about drug use, especially opiates, on their level is extremely important. Courtesy photo.

Adolescents and opioid use: Early drug use often leads to lasting consequences 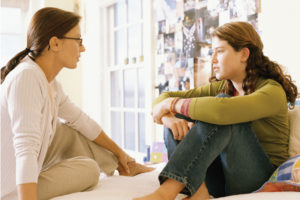 Talking to teens about drug use, especially opiates, on their level is extremely important. Courtesy photo.

Editor’s note: This is the second of a three part series about opioid abuse in Collin County. Due to the subject matter, names in the story have been changed to protect identities.

Peer pressure. Emotional trauma. Abuse. Each can be equally destructive when it comes to teens – especially when they choose to self-medicate instead of getting help.

In Wylie and many suburbs in Collin County and across the U.S., teens are using drugs more than ever. It often starts with marijuana, and depending on the situation and the person, it can quickly escalate.

For Jeannie, her daughter Sara’s emotional problems began at the age of 12. Sara had come home and found her father unresponsive. He had had a stroke. Though he survived, it took a toll on Sara. Counseling helped her deal with the situation, yet she started experimenting with marijuana.

“People offered her things to make her feel better and reduce her depression and anxiety… and she tried them.”

Jeannie said Sara was always very impulsive and thinks that’s what led to her willingness to try things – plus she was hanging with the wrong crowd.

In time, her daughter’s drug use progressed to methamphetamine and other substances before she became addicted to injecting heroin.

“The meth was actually given to her by the mom of one of her friends,” Jeannie said.

The meth addiction lasted several months until it started making her sick and then she quit.

Jeannie did not know her daughter was using until one of Sara’s friends told her about it.

“One of her friends told me she (Sara) was hanging out with some teens who were using “cheese” (snorting heroin) and monkey water (mixing it in water, then snorting it), she said. “Her behavior wasn’t that different from normal but one day she fell asleep on the couch and her breathing was not normal. There were long pauses in her breathing and audible gasps as she would finally take a breath. Then I knew. I talked to her but she brushed it off as being overly tired.”

Throughout the duration of Sara’s drug use, Jeannie was parenting on her own because of her husband’s health situation. Meanwhile, her older son distanced himself from his sister when he realized what she was doing.

Naturally, Jeannie wanted Sara to stop and at one point when she knew Sara was going to buy heroin, she called the Wylie PD so they might catch her (Sara) with it. It didn’t work, yet the officer called and talked to Jeannie. His advice? Don’t kick Sara out. Because if she did, she wouldn’t come to her for help when she was ready to quit.

Oddly enough, Jeannie said Sara was a great family member even on drugs. She kept a job and helped take her dad to his many doctor appointments.

“She never damaged anything in the house or stole anything. She made her own car payment, etc.,” she said.

“I knew that if I kicked her out, I wouldn’t be able to keep an eye on her.”

Having an addict in the house is not easy. Jeannie said she tried drug testing at home with consequences for failed tests, but, in her case, it was not helpful as it only made Sara avoid her. Sara told her repeatedly that she couldn’t quit until it was her idea.

“I kept trying to push it and Sara would try and fail,” Jeannie said. “Eventually, I just tried to help her see how life would be better without it, without constant nagging. When she was ready, it was much easier. They need to know that you are there to help.”

In the event Sara overdosed, which is often fatal, Jeannie kept Narcan on hand. Narcan is a nasal spray used in the event of an opioid overdose.

“It’s a prescription, but we received it for about $25 by using a pharmacy her doctor recommended,” Jeannie said. “It gave me a little peace of mind.”

When Sara was ready, doctors advised inpatient detox but she refused. In turn, Jeannie found that many of the drug treatment centers were not locked, so Sara could potentially escape. After more research, the determined mom found Suboxone, a medication approved by the FDA to treat opioid dependence, containing buprenorphine and naloxone. According to the FDA, if used properly, the drug can increase treatment options for those in need.

“That medication, along with a few others, got her through the withdrawals,” Jeannie said. In addition, Sara saw an addiction psychiatrist at Solace Counseling in Dallas.

Sara’s path to recovery has not been easy. She developed osteomyelitis, a painful bone infection, from injecting herself despite using clean needles.

Because of the infection, Sara spent a few months in a skilled nursing facility, and when she came home, she was bedridden for six months. Some opioids were needed for the severe pain which Jeannie managed very carefully.

Today, at 19, Sara is still recovering, though the pain may never go away completely. She is also trying to finish school, despite learning difficulties that developed as a result of the drug use.

As for Jeannie, she remains hopeful but realistic.

“There will always be a risk of her relapsing,’ she said. “So I worry about what will happen when tough emotional situations come up.” 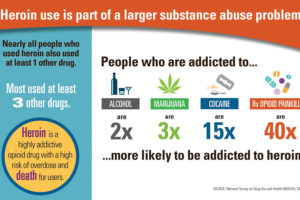 Opioid use makes individuals more likely to become addicted to heroin. Source: National Survey on Drug Use and Health

Kristen often thinks about when her son John started doing drugs. Though she doesn’t profess to know the real reason, at times she thinks the pain he felt after his biological father rejected him may have “triggered things” despite having a loving stepfather since he was two.

Kristen said he was a typical sporty kid, playing athletics for years until he reached middle school. She also said he was always a smart kid who “could show up for school and not even try and still get good grades.”

When John started junior high in Wylie, he started hanging around with the wrong crowd and started doing drugs. Then he stopped playing sports – which is a distinct warning sign.

Kristen advises other parents to be aggressive when they see behavioral changes and investigate as much as possible.

“We knew he was having some problems but we were in denial,” she said.

As a former teen drug and alcohol counselor for seven years, Kari Simonitch has seen plenty of addicts.

“When kids start using in middle school its not a choice,” she said. “It’s peer pressure or trauma that gets them started using drugs.”

Simonitch advises parents to talk to children on their level.

“All those conversations about drugs should be going on their whole life, “ she said.” This is a generation of entitlement. Kids say, ‘I want what I want when I want it.’ It’s an addict’s mantra.”

John started with marijuana, and by the time he reached high school he had progressed to pain pills, Xanax, and eventually heroin.

It didn’t take long before the principal called John’s parents at the beginning of his freshman year. Despite their efforts, John was sent to a rehabilitation facility for 60 days called Sundown Ranch in Canton. He was just 15 years old.

Simonitch said it’s hard to find a good rehab that deals with kids under the age of 18.

“For those under age kids, the whole time they were using drugs they were supposed to be developing coping skills, but many treatment plans are only 60-90 days, then they kick them to the curb,” she said.

The first time John came back from rehab, Kristen convinced herself that they (rehab) fixed him and he was going to get better.

Returning to school wasn’t an option because they knew he could quickly slip back into his old habits.

“We didn’t even try to go back to school here,” Kristen said. “I don’t know what the district is doing about the problem. I do wish Wylie ISD would talk more about it,” she said.

They enrolled John in Serenity High, a recovery high school in McKinney ISD. Because the school is a self-paced program, John finished high school in 1 ½ year and went to work.

“Getting a job not a problem, just keeping it is,” his mother said.

Like all addictions, there is a chance of relapse and that is what happened to John. He went to rehab again at age 16 after a series of events that included him stealing his parent’s car and taking it out of state for 48 hours.

After the second trip to treatment, Kristen said she was woken up (even more so) to her son’s lying and addiction. “Before, sometimes we just wouldn’t tell him no,” she said. Now she routinely searches his room, gives him a debit card instead of cash, and insists he keep the “Find My iPhone” App on his phone or risk losing it.

“I know for a fact he was also going into Dallas to get his drugs,” she said. “Sometimes we would write down his mileage… not really wanting to know what was going on.”

John, now 17, continues to work on his recovery by attending group therapy and one on one counseling three times per week for three hours at a time.

As for Kristen and her husband, she said they’ve learned not to have any expectations beyond him having a job during the summer. “He has to figure it out,” she said. “Only by the grace of God he is still alive.”