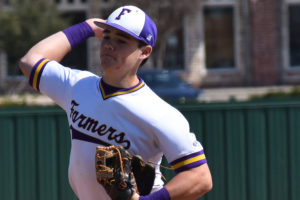 Things will get even tougher this week for the Farmers in District 10-3A baseball.

That’s followed by 7 p.m. Tuesday, March 23 on the road versus Leonard.

“Both teams figure to finish in the top half of the district. We won’t play an easy one, and I would expect that these games will be similar to the first two we’ve played,” FHS head coach Jon Nordin said. “Our guys are fighters. They have to scratch and claw for everything they get. I think we can play better and we’ll keep trying to do that this week.”

For the complete story see the March 22 edition or subscribe online.