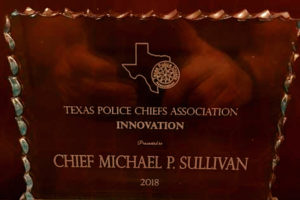 Farmersville Police Department touts a new award and this one is all about innovation for the safety of their citizens.

The department received the 2018 Innovation Award from the Texas Police Chief’s Association of Texas.

The award was presented at the annual conference in Galveston Wednesday, March 28.

Farmersville PD was recognized for its holiday package program, which was started in November 2017 and ran through December 2017.

For the complete story see the April 5 edition or subscribe online.