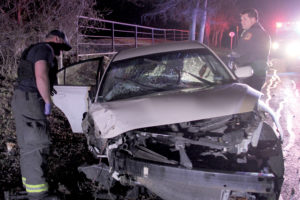 According to information released by Farmersville Police Lt. Marsha Phillips, two 16-year-old males from Princeton were traveling on Hwy. 380 close to Brookshire’s when Patrol Officer Korey Redding clocked them for speeds over 100 mph in a white 2010 Nissan Altima.

The teens fled from the officer after he attempted to initiate a traffic stop.

Continuing down Hwy. 380, the teens turned onto CR 559, the road that leads to the lake.