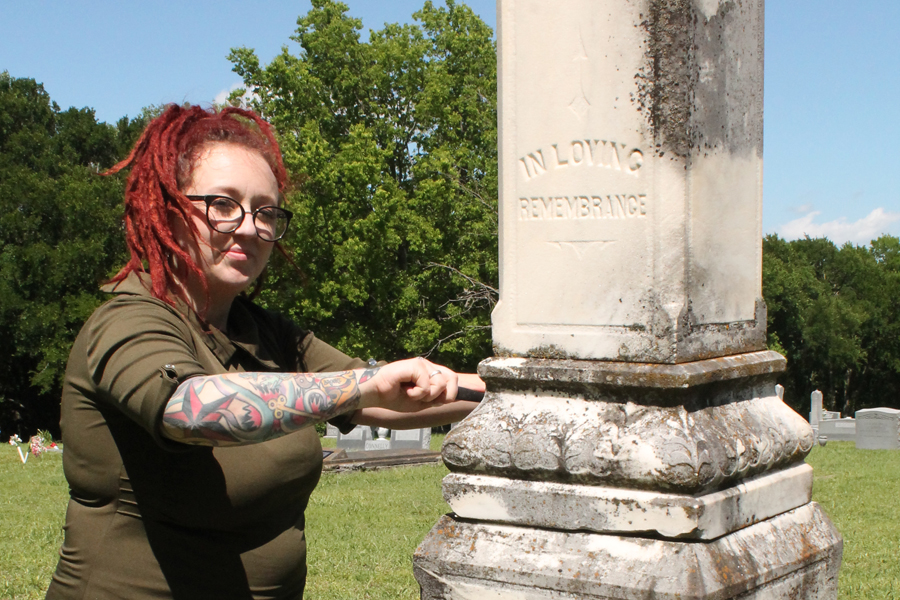 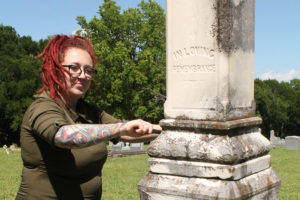 Armed with cleaning solutions, brushes and elbow grease, Kirsten Dodd-Schubert is on an unusual mission to clean grave markers tarnished over time by the elements.

She started cleaning markers in 2014 and formed Tombstone Touch Ups in 2018, a non-profit business that operates as a subsidiary of Wylie Historical Society. She estimates that she has cleaned about 100 stones at cemeteries in the area.

Also, she recently entered into an agreement with Collin and Rockwall counties under which probationers can help clean markers under supervision to complete community service requirements.

“They want to be functioning members of the community,” Dodd-Schubert says of her helpers.

A native of Perryton in the upper Texas Panhandle, the 29-year-old graduated from Plano Senior High School in 2005. She and husband Brandon are parents of two sons, Jackson, 9, and Winston, 8, and she serves as Cubmaster for Cub Scout Pack 1988 of Garland.

Dodd-Schubert reported that she has long been interested in cemeteries, starting when she was a child and made many visits to the family cemetery of her mother, New Energy Cemetery in Belott that dates back to the 1880s. “That is where I got my fascination with cemeteries,” she declared.

She also said that she saw a video about a man in Florida who cleaned the headstones of military veterans’ graves, and recalled, “I asked why veterans? Why not everyone?”

With a goal in mind, Dodd-Schubert started training through online lessons and also as a assistant to some people in the Texas Panhandle who were cleaning headstones. Through them she learned about chemicals and brushes.

“You can really bugger some stuff up,” she said about using the wrong supplies.

The first thing to do when cleaning headstones is to scout the cemetery to identify stones needing attention and to determine what kind of stone the markers are made of, marble, granite, limestone or sandstone. Each requires a different technique.

Before any work is started, permission must be obtained from the groundskeeper or the cemetery board of directors.

Grave markers could be covered in lichens, algae, mold, rust, tree sap, which often makes them near impossible to read and damages the stone. She uses a biological solution that breaks down impurities, an anti-mold cleaner, soft-bristle brushes and a healthy amount of elbow grease.

When she cleans a grave marker, the biological solution is left on and continues to work for weeks to brighten the stone. Eventually, residue is washed away by rains.

Working in cemeteries has given Dodd-Schubert an education in symbolism. For example, a willow tree carved on a stone indicates the deceased suffered a tragic death, a draped cloth is a sign someone died before their time and a lamb marks a child’s grave. Cemeteries also provide a history of a community.

“I love doing this. I like to learn about the families if I can,” she said.

Dodd-Schubert reported that she does a lot of cataloging for “Find a Grave” and helping people research their genealogy.

As part of grave stone cleaning, she may level a marker, make repairs to broken stones and perform cemetery plot maintenance. She said that the stones may topple from soil movement or vandalism and pointed out that Wylie Cemetery has many toppled or damaged.

There are many lost or abandoned cemeteries in the area and Dodd-Schubert got a thrill from discovering one, Shiloh Cemetery, that is in private land near the site of the Eureka community east of Wylie. She is researching the cemetery to try and get a historical marker. “Finding Shiloh Cemetery was huge for me,” she declared.

Dodd-Schubert does her work for free, but accepts donations to pay for supplies. “I do this for free because I like it,” she said.