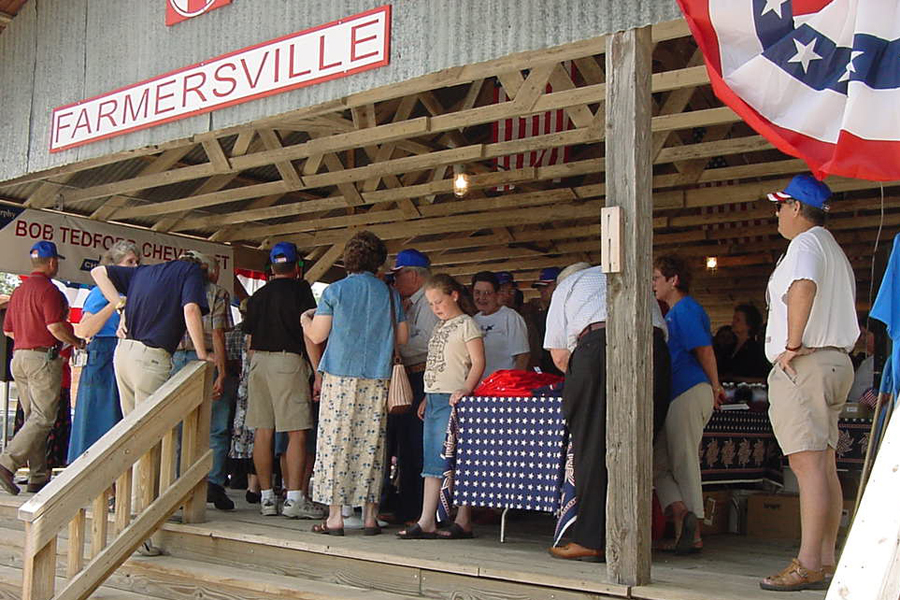 Over 18 years Audie Murphy Day has evolved from a basic community event to an elaborate one with parades, flyovers and more. Regardless, the focus has remained the same: to honor hometown hero Audie Murphy and local veterans. Courtesy photo. 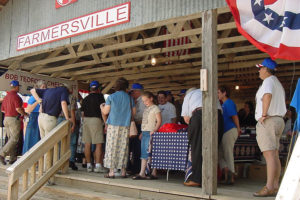 Over 18 years Audie Murphy Day has evolved from a basic community event to an elaborate one with parades, flyovers and more. Regardless, the focus has remained the same: to honor hometown hero Audie Murphy and local veterans. Courtesy photo.

What began as a small gathering of individuals set together to honor Audie Murphy has evolved into an elaborate, hometown festival.

Saturday, June 17 will mark the 18th year for Audie Murphy Day in downtown Farmersville. Below is history of the event from its inaugural beginning through 2016.

The first celebration was small and began at noon, May 18, 1999 as citizens Jim Foy, Charlie Whitaker, Mary Whitaker and Ed Stuart gathered at the Audie Murphy Memorial to mark the 27th anniversary of Audie’s death by reading the inscriptions on the marker.

Since the application process for Texas Main Street designation was just getting underway, they discussed the possibility of holding an annual gathering honoring Audie Murphy as well as all area veterans. Thus, the concept of Audie Murphy Day was born.

Officially designated as an annual event, Audie Murphy Day started June 20, 2000 as a ceremony sponsored by the Main Street Program was held at around 11:30 a.m. on a Tuesday. There was no stage and about 20 chairs were set up west of the memorial. Foy and Stuart discussed Audie Murphy’s life and Richard Holbrook and son played Taps.

The third annual AMD festivities were held June 20, 2001 and included a ceremony at noon, a flyover, and a presentation of a flag from the Capital presented by Sen. Florence Shapiro’s staff associate.

For the first time, there was a stage used as Foy gave a bio of Audie Murphy with Whitaker introducing local veterans.

The fourth annual AMD festivities were held June 20, 2002, this time in the evening with a parade and program at the new gazebo that had been built downtown.

The festivities included a flyover by the Commemorative Air Force, a painting was presented by the Audie Murphy Research Foundation, Garland Community Choir sang and Judge John McCraw dedicated the gazebo.

The ceremony was held at the gazebo on the square with U.S. Congressman Ralph Hall as the featured speaker along with performances from the Farmersville Community Choir and bagpipe player.

For the sixth annual Audie Murphy Day held June 20, 2004, there was no parade, however, tasty nibbles were shared as a covered dish luncheon was held at the Onion Shed starting at 12:30 p.m. The festivities included the dedication of the Audie Murphy Trailhead of the Chaparral Trail and a performance from the Community Choir directed by John Foster.

The seventh annual Audie Murphy Day was held June 20, 2005 and featured The Wall That Heals, a Vietnam Wall Memorial display. The display was presented Friday through Monday at the Audie Murphy Trailhead.

At 5 p.m. Captain Kyle Goldstein and a second pilot performed a flyover in Air Force jets followed by a parade featuring area veterans.

A ceremony was held at the Onion Shed where Roland Boyd presented a portrait of Audie Murphy to the city, County Judge Ron Harris and State Rep Jodie Laubenburg spoke, and Charlie Tucker also spoke.

The seventh annual Audie Murphy Day was held June 17, 2006 and featured a parade kicked off at 5:30 p.m. with a military flyover by Captain Goldstein. The ceremony was held at 6:30 p.m. at the Onion Shed with special music performed by Hillary Evans, Brooks Payton and Russ Murphy. Audie Murphy’s sister, Nadine Murphy Lokey was the featured speaker.

The eighth annual festival was very similar to the prior year and was held June 16, 2007. There was a ceremony at the Onion Shed at 6:30 p.m. with special music by Hillary, Russ Murphy and Brooks Payton, and Lokey spoke once again.

Ninth annual festivities occurred June 20, 2008 with Goldstein leading the flyover before the 5:30 p.m. parade. Hillary Evans sang the National Anthem and Russ Murphy and Brooks Payton sang. Windy Linde gave a short recollection of Audie Murphy and the historical marker, which was to be placed downtown was announced.

The 10th annual festivities were held June 20, 2009 with Captain Goldstein again providing a jet flyover. The Mood Swings band played before, during and after the program, and for the first time, the Tri-County Veteran’s Honor Guard presented and retired the colors, and gave a 21-gun volley and Taps at the end. Congressman Ralph Hall spoke extensively and Lokey also spoke.

On June 19, 2010, the 11th annual festivities were held, without a flyover due to Pentagon budget cuts. A parade was held downtown.

On June 18, 2011, Audie Murphy Day took a drastic turn in its history as the festivities were moved to the morning due to hot temperatures in June.

The veterans gathered at the First United Methodist Family Life Center for breakfast. At 10 a.m. Captain Goldstein again did the flyover followed by the parade. Cindy Dickens sang the National Anthem, while County Judge Keith Self gave a speech. Charlie Whitaker announced the Veterans names.

Veterans gathered at the First Baptist Church and the parade had a large turnout.

At the program, Rev. Tom Waitschies gave the invocation, Greg Barber talked, highlighting his time as U2 pilot, Eddy Daniel recognized the vets and the Tri-County Honor Guard closed the program.

The 14th annual AMD festivities were held June 22, 2013 and included a Commemorative Air Force flyover by the Ghost Squadron.

June 21, 2014 was the 15th annual AMD and included a Commemorative Air Force flyover.

The 17th annual AMD was held June 18, 2016 and included a Commemorative Air Force Flyover and a Huey helicopter flown by Jim Skinner.

The 101st Airborne Unit had a display at the Onion Shed, Robert O’Malley of Goldthwaite a recipient of the Medal of Honor attended. Mike O’Day honored MIAs and POWs, Duffy Hudson, an actor with one-man show “To Hell and Back: The Audie Murphy Story,” was the featured speaker and Brandon Deffibaugh played Taps.