A show of honor 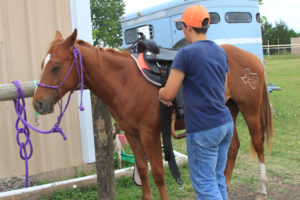 Honor, respect tinged with a bit of sadness was on display for the 18th annual Audie Murphy Day festivities.

Held Saturday, June 17, Audie Murphy Day kicked off with a breakfast and time for veterans to share memories and conversation at the First Baptist Church of Farmersville.

Excitement flooded the air as members of the Sergeant Audie Murphy Club arrived from Fort Hood.

The club, founded in 1986 at Fort Hood, embodies the following principals including supporting the soldier, their families and the greater Fort Hood community, preserving the spirit of fellowship among former, present and future members and fostering confidence between superior and subordinates by teaching loyalty, discipline, professionalism and caring.

After breakfast, veterans moved to ride in the parade, which was held in downtown Farmersville.

For the complete story see the June 22 edition of The Farmersville Times or click here for the e-Edition.