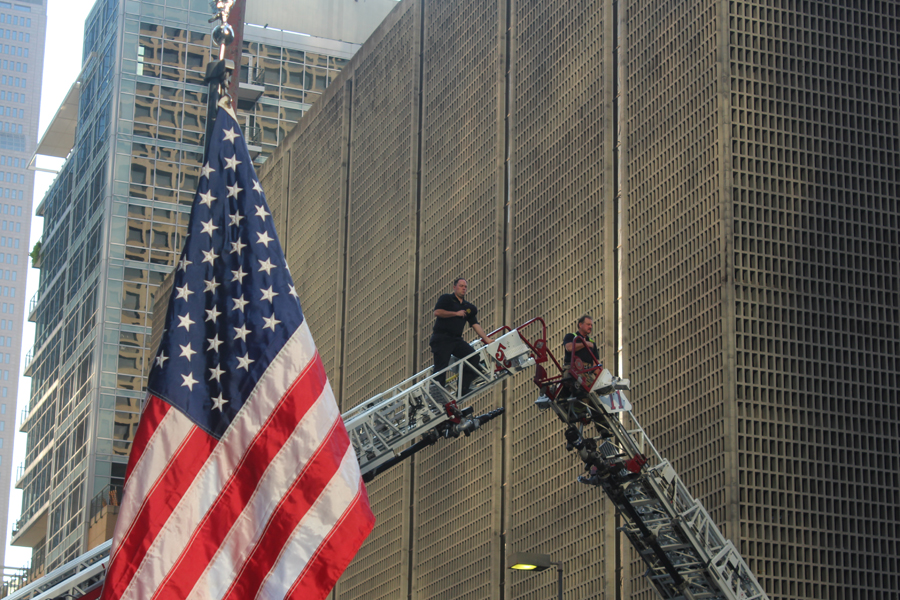 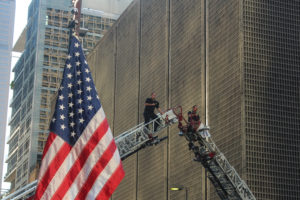 Dallas firefighters stand at attention during the playing of the National Anthem at the Dallas 9/11 Memorial Stair Climb. (Wyndi Veigel/The Farmersville Times.)

Climbing 110 flights of stairs is no easy feat, much less when one adds bunker gear, air packs and fire helmets into the mix.

For many Collin County first responders, the Dallas 9/11 Memorial Stair Climb Saturday, Sept. 9 marked a time of camaraderie, laughter and a time of remembrance for those first responders who died Sept. 11, 2001 in the terrorist attacks at the World Trade Center.

Embracing the motto, “They climbed so we climb,” the first responders took step after step to climb 55 flights to the top and then returned to the bottom at the Renaissance Tower to do it all over again until 110 floors were climbed, equivalent to the number of flights in the World Trade Center.

In preparation, many fellow firefighters climb stairs each day so their bodies are as ready to take on the task of rising upward through the 110 flights. However, with the added heat in the stair well along with the more than 400 climbers additional challenges are presented on the day of the climb.

Starting out the day with a group photo containing 343 firefighters, 70 police officers and nine medical technicians – the number of first responders who died when the World Trade Center towers collapsed – participants are given time to reflect on the sacrifices made on Sept. 11, 2001.

After taking the photo, first responders heard from key note speaker Joe Torrillo, who was a 25-year lieutenant with the New York City Fire Department and is now on disability. He spent the first 15 years of his career in Engine Company No. 10, across the street from the South Tower of the World Trade Center.

For the full story see the Sept. 14 edition or subscribe online.

For videos of the stair climb see below.