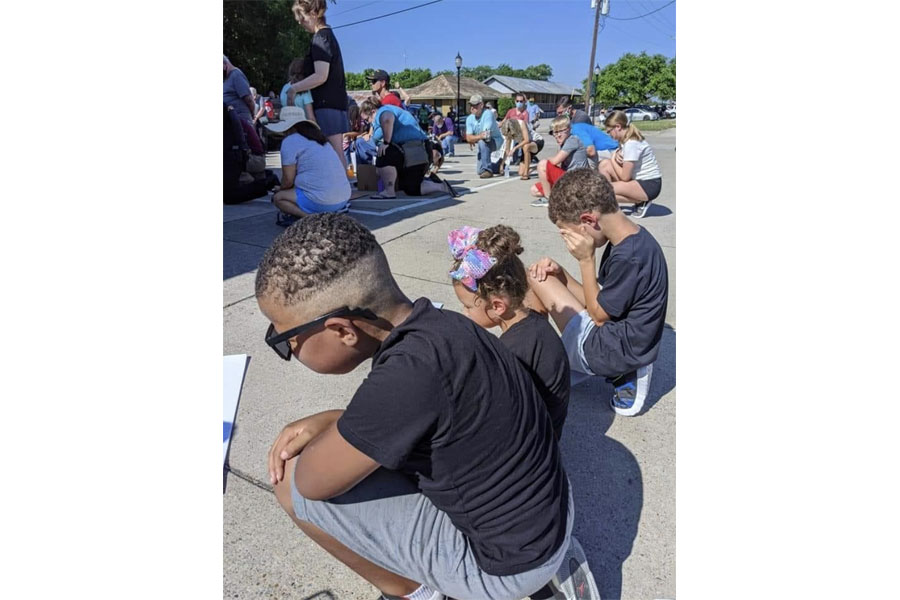 The death of George Floyd at the hands of Minneapolis, Minn. law enforcement on May 25 has caused a world­wide call for action to address police brutality, discrimination and racial injustice.

In Farmersville, what started out as a discussion on social media about this injustice in our nation turned into a march to create awareness for unity, equality and justice last Satur­day.

Kevin Navors, a Farmer­sville resident of four years, said the online back and forth postings prompted him to take action. He said during the pro­cess someone mentioned “why don’t you do something about it,” so he did.

When Farmersville Police Chief Mike Sullivan reached out to him and offered his help, Navors began the process of developing March For Unity.

“Chief Sullivan offered his help and gave me some di­rection about the march. He agreed to walk side by side with the participants and speak at the event,” Navors said.

Sullivan had recently posted a letter on the police depart­ment’s Facebook page express­ing his disgust about the events surrounding Floyd’s death.

The letter, which was also published last week in The Farmersville Times, outlined Sullivan’s outrage about the actions of law enforcement that day in Minneapolis, publicly condemning the murder.

Sullivan said he’d been pay­ing attention to social media and noticed local citizens were discussing the need to hold a peaceful demonstration, so he sent Navors a note offering help with the march if needed.

The chief said the first con­cern was to create a safe en­vironment for the marchers. He said that last weekend 37 demonstrations were held, and while he wasn’t concerned about safety challenges from local residents, potential out­side interference had to be ad­dressed.

Admittedly, Sullivan said with the large number of events over two days, the possibil­ity of disruption from outside forces was slim.

“In retrospect we had a great turnout and the experience was better than I expected,” Navors said. “I had people come up to me after the event and thank me for the opportunity.”

He added, “I was told that something like this has never happened in Farmersville. I think this is a good step in bringing awareness and build­ing unity.”

The event, For the Love of Life, March For Uni­ty, Equality and Justice, started at 9:30 a.m. at the Onion Shed on Main Street and stopped at the gazebo on McKinney St. It included 8 min­utes and 46 sec­onds of silence, representing the length of time Officer Derek Chauvin knelt on Floyd’s neck until he died.

The march then headed back to the Onion Shed, ending with prayer.

“That was pretty powerful,” said Sullivan. “Lots of prayers at the beginning and the end. It was a very positive experience. I glad to be a part of it.”

The next day, Navors recounted the experience with a social media post.

“Today I woke up with a joyful and thankful heart. I took the time to choose my words correct­ly today. I would like to thank you all for trust­ing in my efforts to organize the March/Protest in Farmersville. It was an honor and it meant a lot to be a part of it. There is a lot to be done in this city and I hope more (will) come together to make this happen. More Unity. Hope everyone stays safe and peaceful. TILL NEXT TIME”