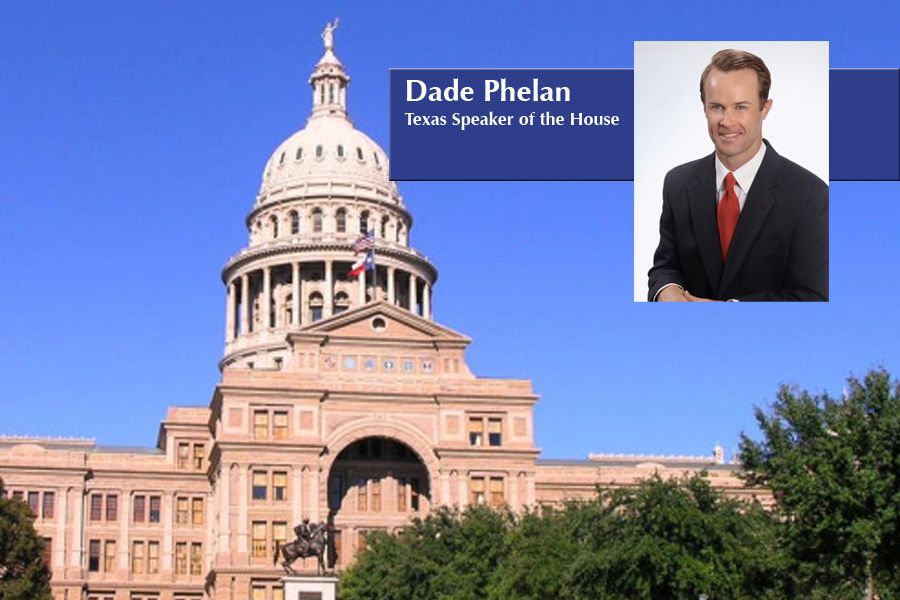 The Texas House elected state Rep. Dade Phelan Tues­day Jan. 12 as speaker of the house. Phelan will oversee the chamber as it faces the toughest challenges since 2011 as the it navigates the ongoing COVID-19 pan­demic and the economic hardship it has caused.

The House voted for Phel­an 143-2. Four members did not vote, and the two dissent­ing votes came from Rep. Bryan Slaton and Rep. Jeff Cason, both Republicans.

In a Facebook post, Slaton said he voted against Phelan because he publicly stated he would appoint chairmanships to Democratic members.

Phelan was the presump­tive speaker of the house nominee coming into the 87th legislative session, having earned the support of 140 members of the House.

He was sworn in by Su­preme Court Justice Eva Guzman and addressed the House chamber after taking his oath of office.

During the remarks, Phel­an urged House members to get to know each other and engage in discourse when they disagree over an issue.

“The Lone Star State has overcome tough challenges before, and with the grace of God and the pioneer spirit that made Texas the beacon of our nation, we can and will do it again,” Phelan said. “We must all do our part – not as Republicans and Democrats – but as Tex­ans and Americans.”

Phelan has served in the House since 2015 after working as a staffer for vari­ous House and Senate mem­bers for more than 20 years.

“To get Texans back to work we must protect out citizens’ health and safety, must revitalize our econ­omy, must reduce burden­some regulations,” Phelan said. “We can do this while balancing the budget with­out shifting the burden of our hardworking families.”

The 87th legislative ses­sion opened with increased security and COVID-19 re­strictions. After the riot in Washington, D.C., the Texas Department of Public Safety sent state troopers to secure the state capitol although there were no incidents of violence.

COVID-19 precautions left the public gallery inside both chambers mostly emp­ty. Spectators were allowed into the public gallery; how­ever, a limited number of free tickets were available on a first-come first-serve basis. Unless speaking, law­makers and their guests wore face masks and everyone en­tering the House and Senate chamber were required to be tested.

In the Senate chamber, Sen. Brian Birdwell was elected President pro tem. Birdwell has served since 2010 and was a survivor of the 9/11 terrorist attack against the Pentagon, result­ing in burns on 60% of his body.