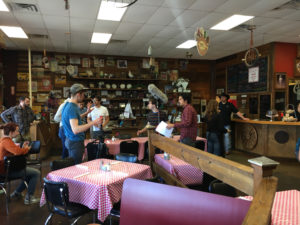 Umbrellas, cords and bags donned a group that was sighted in town last week at multiple locations.

Students from the University of Texas visited Farmersville March 11-13 to shoot a film called Baby Girl. The film is about a small-town Texas story about an 18 year-old single mother struggling to give her daughter the life she deserves, and the adult choices she is faced with in the process.

The cast and crew found Farmersville courtesy of Laura Spurger, the co-writer and lead actress’ mother, who grew up in the local hamlet. “When the script was finished, Sarah Spurger and I began researching locations to set the film, and we realized that the family connection to Farmersville and our familiarity with its layout and culture offered the perfect location,” Director and Associate Producer Joshua Defour said.

When the directors visited Farmersville for the first time, they immediately fell in love.

“From the historic Main Street, with its original storefronts featuring everything from rare antiques to homemade blankets and outerwear, to the friendly and personable strangers who went out of their way to make us feel welcome, we couldn’t believe such a beautiful place actually existed. Suddenly our script had come to life, and we knew we’d found our location,” Defour said.

The film is technically for an assignment for the Master of Fine Arts graduate film production course at the University of Texas at Austin, but ever since the script, location, and cast came together it became apparent that the film was of a higher caliber, the director said, and they are aiming for selection for the 2016 Fall film festival season.

Securing food for eight cast members and 13 crew members would be a challenge on any budget but for those who are college students making a film, it proved even more of a challenge.

“We’ve been taken aback by the genuine kindness, hospitality and generosity given forth by local businesses and the community as a whole,” Defour said. “Every location and person that crossed paths with our crew welcomed us with open arms. We couldn’t be more appreciative or thankful.”

For those interested in seeing the film, the director is hopeful that a showing can be done in Farmersville in June, otherwise the film will be available to view on Vimeo.com/de4our after it has circulated through the festival market. 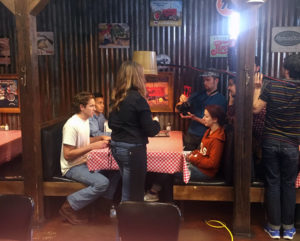 Cast and crew crowd into the booth at Charlie’s Old Fashioned Burger to shoot scenes for a movie.