Hurricane Harvey: a look back 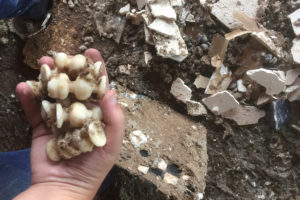 Reagan Rothenberger, Farmersville Main Street Manager, picks up the pieces of a chess set after Hurricane Harvey destroyed his family home outside Beaumont last year. He has been through three hurricanes. (Courtesy photo)

Farmersville Main Street Manager Reagan Rothenberger is no stranger to hurricanes. As a native of Beaumont he has been through three: Hurricanes Harvey, Ike and Rita.

Looking back on the one year anniversary of Hurricane Harvey, Rothenberger has had an up close experience examining how to pick up the pieces and the condition of the human spirit during times of distress.

In 2015, Rothenberger inherited a piece of property from his grandfather that had been in his family for 50 years. On it was a small home that he frequently used. He was only a few weeks away from completing a major renovation on the home when Harvey struck.

The home was located in north Beaumont on a bluff directly in view of the Pine Island Bayou, which is considered the western branch of the Neches River. This historic waterway is known for flooding, but the worst recorded flood, which occurred in 1992, only caused a couple of inches of water to enter the house.

For the complete story see the Sept. 6 edition or subscribe online.