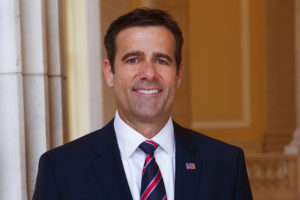 Congressman John Ratcliffe was recently nominated by President Donald Trump for the Director of National Intelligence position but withdrew his name from consideration. (Courtesy photo)

After less than a week, Congressman John Ratcliffe has withdrawn his name from a possible nomination for Director of National Intelligence.

“While I am and will remain very grateful to the President for his intention to nominate me as Director of National Intelligence, I am withdrawing from consideration. I was humbled and honored that the President put his trust in me to lead our nation’s intelligence operations and remain convinced that when confirmed, I would have done so with the objectivity, fairness and integrity that our intelligence agencies need and deserve,” he said.

Over the past week, the congressman had been criticized by both the Republican and Democratic parties for his lack of experience and what many consider partisanship in a job that should objectively oversea the nation’s intelligence agencies.

“I do not wish for a national security and intelligence debate surrounding my confirmation, however untrue, to become a purely political and partisan issue. The country we all love deserves that it be treated as an American issue. Accordingly, I have asked the President to nominate someone other than me for this position,” Ratcliffe said.

According to information released by President Donald Trump on Twitter, he had advised Ratcliffe that limelight in the media would be miserable for him and his family after being “treated very unfairly” by journalists since the nomination announcement.

He has been the U.S. Representative since 2015 for Texas’ 4th District.