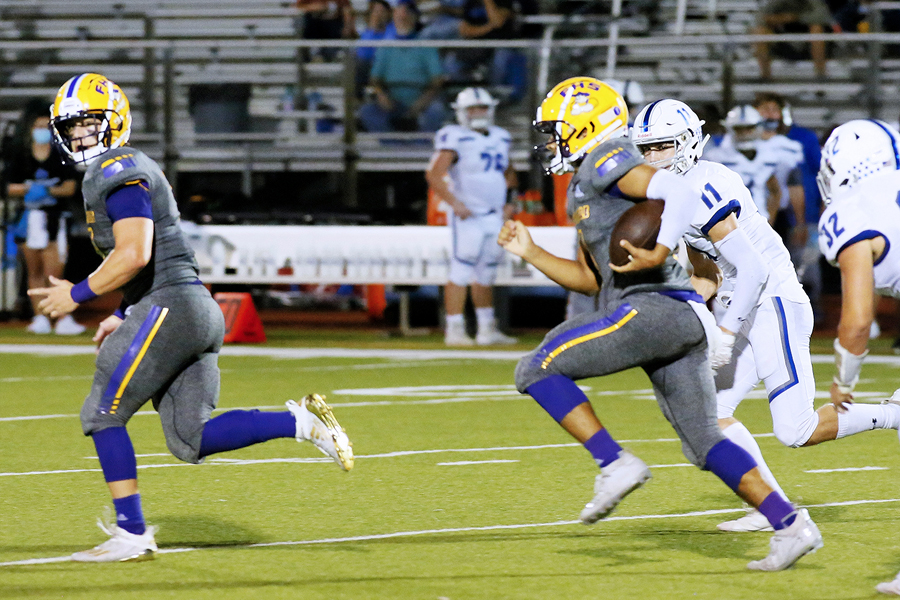 Three keys to the game: Farmersville football versus Ford

Coming out of their bye week, the Farmersville football team hopes to start their district slate strong, as they host Quinlan Ford for their homecoming game Friday, Oct. 9. Here are three keys to a Farmers victory over the Panthers:

Operating out of a Fly-T formation, Quinlan Ford have thrived this season on a balanced rushing attack, with five Panthers having rushed for over 180 yards so far this season. As a unit, Ford has averaged 406 rushing yards a game, so the Farmers will need to slow down the Panthers rushers, in particular leading rushers Jadonovan Williams and Kaiden Roden, to keep the game close.

2. Establishing a physical presence on defense

Similar to Farmersville, the Panthers operate with a strong dual threat quarterback, as Eli Chambers is a threat operating out of the backfield. Chambers enters the game having completed 11 of his 24 passes for 232 yards and three touchdowns, while being third on the team in rushing yards. The Farmers will need their defensive line and linebackers to be physical with the Ford offensive line to slow down their opponents.

3. Starting off fast and finishing strong

In each of Farmersville’s four games this season, the offense has taken a few drives to get into the end zone, allowing the opponents to build double digit leads. Against Ford, the offense will need to get into a groove early and keep that offensive momentum through the final minutes of the game in order to find success on Friday.

For the full story, see Oct. 8 issue or subscribe online.