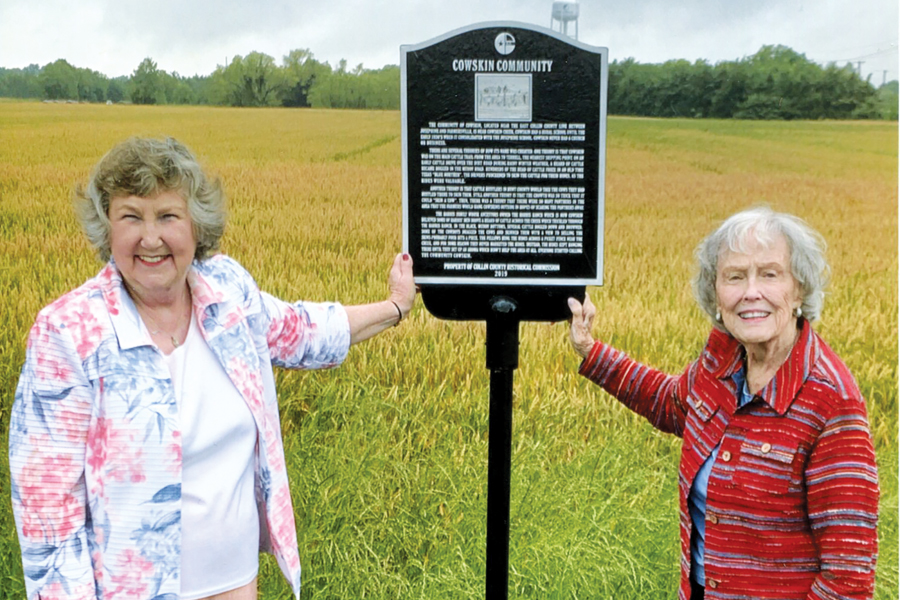 Collin County Historical Society member Linda Hess, left, and Colleen Hager at the site of the Collin County historical marker for the Cowskin Community. The marker, located east of the intersection of FM 547 and CR 649, was unveiled Sunday, May 16 by Hess and Hager.

The Collin County Historical Commission celebrated the un­veiling of the Texas Historical Marker for the Snow Hill Com­munity Saturday, May 15.

The marker is located at the intersection of CR 619 and CR 833 near the original site of the D. B. McCall Store.

Attendees of the dedication were entertained with music as well as reflections of Snow Hill given by Lannie Jackson, Ricky Jackson, Terry Jackson, Mike Hurst and Linda Willis.

Winnetta Morrow read the following plaque inscription detailing the history of the community.

“Situated in the high lands between Pilot Grove and Indian Creeks, the Snow Hill Commu­nity formed as a small cattle and farming community in 1850. Oral tradition states that surveyors used a snow-covered hill as a base for their map and the name Snow Hill remained for the area.

In 1850, Alfred Thompson and his family from Greene County, Mo, settled in the area, building a sawmill and bridge over Pilot Grove Creek. The settlement, with numerous pio­neer families, was known as the Thompson Community until the 1890’s. As with any com­munity, a burial ground was es­tablished with the first burial in 1855, although the land for the cemetery was officially deeded 30 years later in 1885 by Alfred and P. T. Thompson, and the Campbell families.

For the full story, see the May 20 issue or subscribe online.