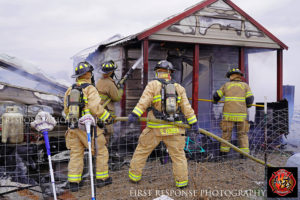 A family lost their homes, a camper and a shed, and all of their possessions after a structure fire occurred Saturday, Jan. 19 on CR 558 outside Farmersville.

Upon arrival, the Farmersville Fire Department saw the trailer fully engulfed and the fire then spread to the shed.

Farmersville FD originally requested mutual aid from other departments including Princeton, but they were called off because the homes could not be saved. Farmersville FD was on scene at the fire for more than two hours.

The four individuals living on the property escaped injury though the family lost three dogs in the fire.

Preliminary investigation indicates that the fire was started by a space heater.

The Rodriguez family lost all of their possessions and has no family living in the area. The camper and the shed were not insured.

An online fundraising effort has been started to help with their immediate needs. The couple’s son, Joe Rodriguez, is a sophomore at Farmersville High School.