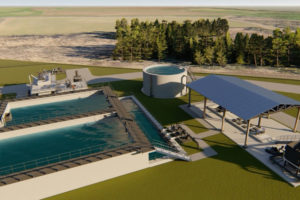 An illustration of what the new wastewater treatment facility in Farmersville will potentially look like was recently presented to council. (Courtesy illustration)

Wastewater improvements for the city of Farmersville are continuing and the rehabilitation of Plant No. 1 is nearing competition.

Improvements to the city’s wastewater system began in 2015 with the project being divided into three phases.

Phase 1 and Phase 2 include improvements to bring back unused portions of the city’s sewer treatment plant online to increase capacity for growth.

Originally, the Farmersville Economic Development Corporation (4A) funded a portion of the first phase, which included the Wastewater Treatment Facilities Master Plan and Sanitary Sewer Interceptor Alignment Study. The study was completed in January 2016 and presented to city council.

For the complete story see the April 11 edition or subscribe online.