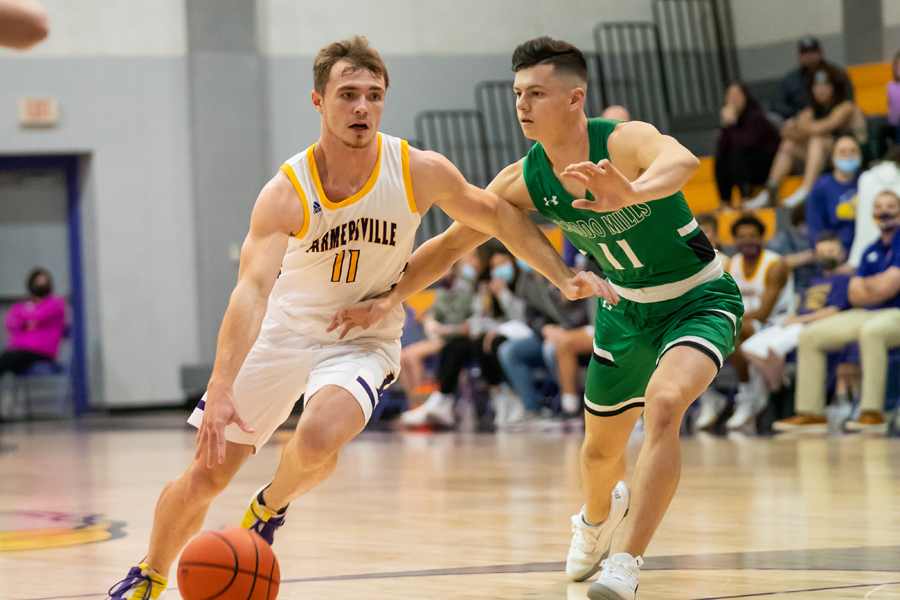 Senior Josh Hoar dribbles the ball up for the Farmers in their game against Caddo Mills Tuesday, Dec. 22.

With both basketball teams going 1-1, Farmersville’s basketball squads cemented themselves as a team fighting for their playoff position. With both teams in the hunt for a playoff spot, here’s what Farmersville basketball faces this week.

Farmersville basketball opens their week with a road doubleheader Friday, Jan. 15, at rival Community High School. Tipoff for the boys varsity team is scheduled for 7 p.m., while the girls varsity team tips off at 5:45 p.m.

As of Jan. 4, the Lady Braves are at the bottom of the district standings, holding a 4-13 overall record. In district competition, Community has yet to win a single game, losing its first five district games by an average of 24 points. Their biggest defeat came against Sunnyvale, where they only managed 22 points in a 63-point loss.

For the Community boys basketball team, they enter this game against Farmersville with similar regards to their girls team, holding a 1-7 overall record. In district competition, the Braves have yet to win a district contest, losing to Sunnyvale by three points before being defeated at home by Terrell by four points.

In their Tuesday night matchup, Farmersville basketball hosts a familiar opponent, facing Quinlan Ford at home. The boys basketball team faces the Panthers in the second game, scheduled for 7:30 p.m., while the Lady Farmers face off against Ford at 6:15 p.m.

As of Jan. 11, Ford is trying to regroup their season as they push for a playoff spot. The Panthers are currently 4-10 overall, including 1-3 in district competition. Their lone district win came against Sunnyvale, winning by four points, while their district losses include a 10-point road loss to Caddo Mills, a 23-point loss to Terrell and a 17-point loss to Kaufman.

For the Lady Panthers, they have struggled at the start of their season, opening with a 3-12 overall record. In district competition, Quinlan Ford has started off 0-3, losing to Farmersville, Caddo Mills and Sunnyvale in consecutive games in December. Their worst loss came against Sunnyvale, losing by 29 points at home. Their matchup against the Lady Farmers went to the wire, with Farmersville coming out on top by six points.