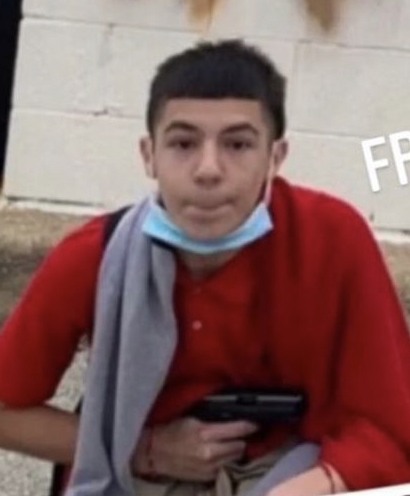 Garland Police identified the gunman who killed three juveniles and wounded another at a Garland gas station the evening of Sunday, Dec. 26.

According to Lt. Pedro Barineau, Public Information Officer for the Garland Police Department, juveniles suspected of crimes are not identified but the department made an exemption because Abel poses a threat to public safety.

Once caught, the department intends to pursue a capital murder charge for Abel Acosta.

Officers also took the 14-year-old’s father, Richard Acosta Jr., into custody after he turned himself in. Richard Acosta is suspected to have driven the truck Abel Acosta used to get to and from the gas station.

Police initially responded to the report of a gunshot wound in a convenience store in the 700 block of West Walnut Street, just after 7:30 pm, Sunday.

When officers arrived, they observed four males inside the store who had been shot.  Three of the males were pronounced deceased at the scene and the fourth victim was transported to a local hospital in critical condition.

The three dead victims were identified as 14-year-old Xavier Gonzalez, 16-year-old Ivan Noyala and 17-year-old Rafael Garcia. The final victim, a 15-year-old boy who works as a cook inside the gas station is in stable condition. His identity will not be released at this time, according to police.

Detectives retrieved video surveillance showing all the victims inside the store.  The video also showed a light skinned male exit a white Dodge 4-door pickup truck, open the front doors of the convenience store and fire at least 20 rounds.

The male suspect is then seen getting back in the white truck on the passenger side and the truck fleeing at a high rate of speed.

The investigation remains active and detectives are still trying to determine what led to the shooting.

Originally, officers apprehended another 14-year-old, Dec. 27, who has since been released, and is not the shooter. The individual could still face charges and remains a person of interest in the case.

Anyone with information is encouraged to call the Garland Police Department at 972-485-4840.

Callers may remain anonymous by calling Garland Crime Stoppers at 972-272-8477 (TIPS).  A reward of up-to $5,000 is being offered for information that leads to the identity and arrest of the suspect.