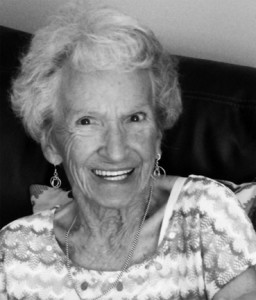 Born February 16, 1924 in Birmingham, MI, the daughter of the late Alta and George Jackson, Jackie passed away on December 29, 2015 at the age of 91.  Jackie attended the University of Michigan where she obtained her RN degree.  While attending U of M, she met Terry Dupuis who introduced her to her future husband, Joseph (John) L. A. DuPuis.  John and Jackie were married on September 11, 1954.  They had 52 wonderful years together.  During their time together they lived in many places throughout the United States and overseas.  Jackie spent her last few years living in Farmersville, Texas.  While there, she enjoyed the warm winters, time spent with her two youngest granddaughters, and worshipping at First Baptist Church of Farmersville.  She loved to visit the rest of her family in Michigan each summer.

Jackie loved to travel, go out for dinner, knit, and keep up with family and friends.  She was especially close to Barbara and Bob Vine, friends for over fifty years.   She also loved to read and enjoyed talking about books with the librarians at the Rike Memorial Library in Farmersville. She made sure to stop at the library frequently to visit and get new books.

In lieu of flowers, contributions in memory of Jackie may be made to the Multiple Myeloma Association or to the Rike Memorial Library in Farmersville, Texas.  Services will be held at Augusta, Michigan’s Fort Custer National Cemetery in June.