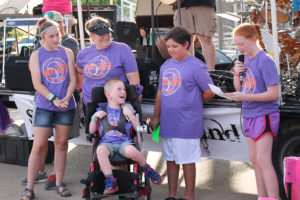 Entertainment and community support for Jarren McTee will abound this weekend as the 10th annual softball tournament takes place.

Jarren, 9, was diagnosed at birth with hypoxic ischemic encephalopathy (HIE) after being deprived of oxygen during a traumatic delivery at birth.

HIE is defined as damage to the cells of the central nervous system from inadequate oxygen.

Darren has been working hard all his life to develop the muscle control to hold his head up, sit up on his own and learn to walk and talk with his adaptive equipment.

Funds raised from efforts such as the softball tournament go to help Jarren and his family with medical and equipment needs.

The weekend’s activities will kick off at 6 p.m. Friday, June 23 at the Spain Complex in Farmersville.

A barbecue dinner will be available for $10 a plate. Live music, an auction, bounce houses and face painting will also be on tap along with opening ceremonies.

On Saturday, June 24, softball games will resume at 9 a.m. along with the annual motorcycle ride.

According to organizers, the motorcycle ride was moved from Friday to Saturday to allow more riders to participate.

There is a $20 entry fee for the motorcycle ride which will start out at the TA Truckstop in Rockwall. Local riders can hop in at 10:15 a.m. at Brookshire’s in Farmersville.

The ride will go through Caddo Mills, Floyd, Merit and stop for lunch at Lea’s in Leonard.

For questions regarding the softball tournament call Paula Coleman at 972-365-9947.